The Culture of Some Nations and Nationalities of Ethiopia

Ethiopia is a country of ‘Over eighty-three ethnic groups, great variations in climate, topography, fauna, and flora make diversity its dominant feature.

All Ethiopia people express their culture in different ways. For example, the way they construct their houses, clothing, food habits, marriage, body culture, burial structures, utensils, agriculture, games, dances, a rite of passage, beliefs, handicrafts etc. About eighty-three languages with more than 200 dialects exist in Ethiopia grouped into four language groups. Some of the most dominant in Tourism are:

Duelling is a single combat game of physical skill. The weapon used in dueling is a two metre wooden pole, called donga; which weighs between 700 and 800 gm.

At its base has a hand grip which may be covered with animal skin and is shaped at the top. In due course blows should be given and received with the shaft.
The right hand holds the base. The left hand remains above the tight hand and in the duelling activity it slides up and down while the right hand remains stationery. The contestants have to wear protective clothing.

This consists of a basket work helmet and right hand guard, bark cloth or cotton cloth to protect the neck and shoulders, rings woven from fibres to protect the right arm and right knee. The basket-work helmet is now replaced with long swathes of cotton cloth winding the head. All these together are called tumoga. The leopard skin, the hide skirt cut into strips and the cattle bell are obviously more for display than for protection. 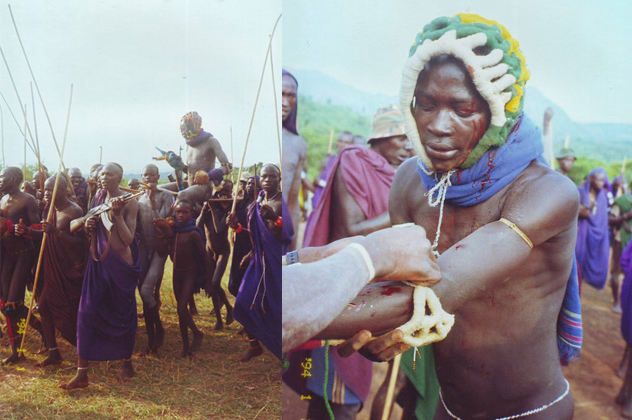 They live in the Omo Valley South West Ethiopia. Their territory is bounded from East Mago River, West and South Omo River, North territory of Bodi. The highest escarpment (Mursi Mountain) rises to 1660 m a.s.l. The land is Semiarid with annual rainfall 400-500 mm. Rainfall occurs between march-April and October and November.

They are primarily pastoralists, who move between their wet season range in the lower Tama steppe and their dry season range in the Mursi Hills sector of Mago National Park. Their language belongs to the Central Surma. East Sudanic branch of the Nilo-Saharan language family. They number about 5000and above. Some practice flood retreat cultivation by the Omo river. They collect honey from traditionally made hives that one frequently sees in the park.

The Mursi, are one of the Nations Nationalities and peoples Region of Ethiopia, geographical located in south Omo.

They are primarily pastorialists, who move between their wet season range in the lower Tama steppe and the lower their dry season range in the Mursi Hills sector Mago National Park. Their language belongs to the National Park. Their language belongs to the central Surma, East sudanic branch of the Nilo-Saharan language family. They number about5000 and above. Some practice flood retreat cultivation by the Omo  river. They collect honey from traditional made hives that one frequently sees in the park. The Mursi women wear clay lip plates that thy make from locally dug clay. The men have stick fights called Donga as in the Surma/Suri.

A girls lip is pierced when she reaches puberty and gradually stretched by the insertion of wooden discs, until large enough to take a clay lip-plate. The origin of disc tradition is not known but there is some hypothesis; to protects from the attack of slavery and the other one is for beauty. The more the lip widens and receives big lip plate, a wealthier husband she entitles to get.

The family gets a large number of bridewealth too. Mursi men use ear disk which determine has wealth/ wealthy. It is also an ornament.

The hammers occupy a territory which stretches from the plains lower Omo Valley in the West across to the Rift Valley of chewing Bahir in the east. In the south coincides with the   Kenya border, and in the north it merges in to the territories of Bana and Bashada  which in turn stretch to the mountains regions of Bako.

Together with bana and Bashada, the Hammer from a single cultural unit. West of Hammers the Karo Society lives. North is occupied by Air. Southeast Hammer, are the Er-bore people occupy.

Economic elements are; pastoralism, rainfed cultivation agriculture, and hunting. Cattle are the ‘crown’ of the economy and society. 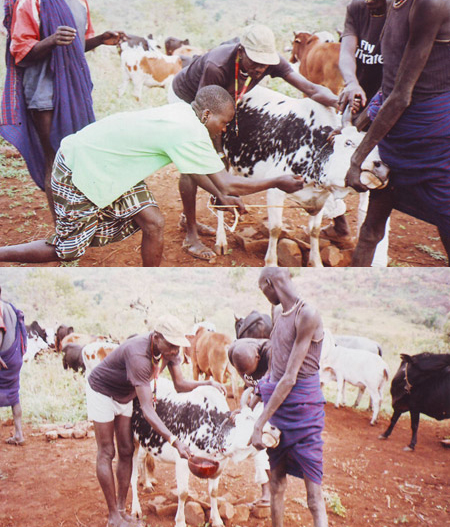 Bull jumping is the core culture of Hammer Society and is the rite of passage to pass from young hood to adult stage. To attain the full member of society one has to pass through this ritual ceremony. It is also a pre-requisite for the beginning of the marriage process, an initiate (Ukuli) is the one going to pass through an initiation ceremony. While a man is an initiate who has already passed through a series of initiation rites and rearranges the cattle’s for jumping of bulls by Ukuli. The ukuli informs all his reactive the day of his initiation ceremony by varying with him Boko.  Boko is a short (25-30cm long) carved stick with a round club end.

Before the start of jumping iron rings, whipping sticks, Boko is brought and then the ritual process takes Place. After this, the whipping/scourging starts. It is the ladies who are beaten. The main reason why the ladies are beaten is that to express their endearment, deep love and in turn, he will be their advocate in bad times. It is also a mark of tolerance and strength.

This is the most important social activity of the Hammer youth.

It is the night dancing which both males and females are involved in. After a good rainy season, when the harvest has been abundant; and when animals are fat and people do not worry about their next meal. It is then that young people gather nearly every night to dance.

There are four sequences in the dancing Churra, Gurra, Purra, and yeda. Churra/to jump up high/, Gurra/wind in to a ring/, Purra/the men are given the occasion to sing as soloist for their favourite women and Yeda; boys and girls hold each other by the waist or the shoulders and dance together.

In addition, the Omo valley is rich in human prehistory, archaeologists have unearthed the remains of the earliest human being on earth. Als,o the area is known for the existence of a large number of wildlife of a great variety.